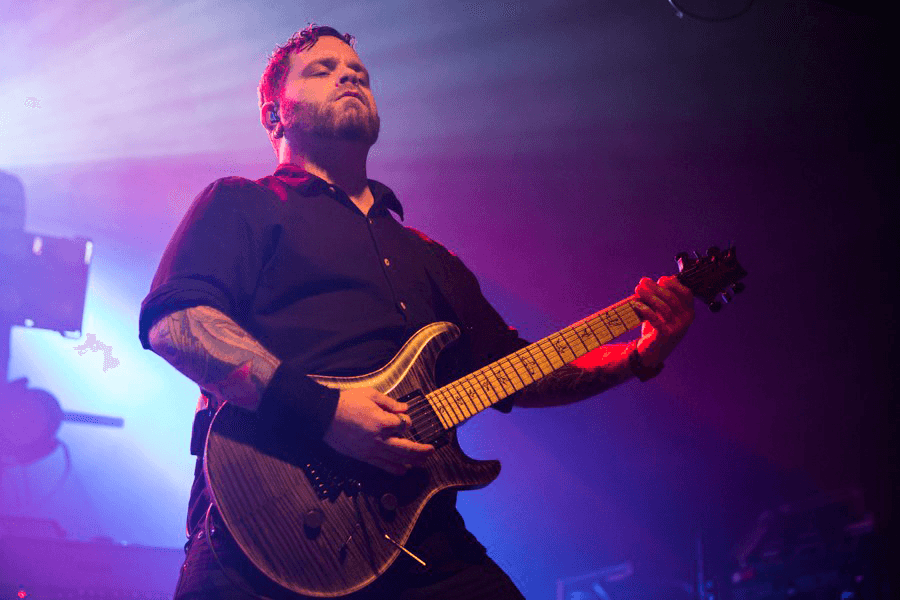 Paul Waggoner and Dustie Waring Between The Buried And Me

We got a chance to catch up with the guys from Between the Buried and Me as they were completing their European summer tour. Paul Waggoner and Dustie Waring handle the guitar duties in BTBAM and construct the band’s soundscape that is sometimes heavy and melodic, sometimes rhythmic and intense, sometimes lush, and always epic. The North Carolina duo have a great sense of the BTBAM sound and how to implement it, and a real southern sensibility to their approach and influences.

How were you guys introduced to the Axe-Fx?

Dustie: Overseas shipping and touring was trashing our amps and gear, and with the costs of getting stuff back and forth we needed a better solution. Daniel Klein from Port City Amps is a good friend of ours and he told us to check out the Axe-Fx to replace all of our amps, effects, and cabling. We were touring with Cynic and Devin Townsend who were both using the Axe-Fx and we thought they sounded phenomenal. We ended up getting 2 Ultras and the rest is history…

Premier Guitar did a rig rundown on your gear showing your live setup of the Axe-Fx Ultra into a Mesa power amp and Port City cabinets. What was your setup for your last album, Parallax II: Future Sequence?

Paul: Hopefully before the next tour we’ll have our gear configured to use the Axe-Fx II live. For Parallax II, we used the Axe-Fx II in the studio, running it through the power section of a Mesa Mark V into a late-90s Mesa Rectifier 4×12 cab with V30s.

How did you arrive at that particular signal chain?

Paul: We experimented with some different routings using as other power amps as well as going direct using cabinet IRs. We found we liked the “meaner” sound we got with the Mesa power amp the best – it just imparted a certain unique flavor to the sound that we liked. We used that for our rhythm tones and a lot of the leads as well. The direct sound was equally good however and we tracked some of the leads straight from the Axe-Fx.
What types of amps in the Axe-Fx

Paul: For our rhythm tones, we used a blend of the FAS Modern with the Solo-100. We threw a little T808 OD drive pedal on there to tighten things up.

Dustie: For leads, dirty and clean, we run the BB Pre drive block.

Paul: The BB Pre gives your leads more body and we like the smoothness of it.

What about for clean tones?

Paul: I used a blend of the Double Verb and the Mr. Z 38 Sr. It gives you a nice big and warm tone, with some twang and some sparkle on the top end. I add some delay and reverb on the end of the chain.

Dustie: I’m blending the Double Verb and another model that I can’t remember.

Do you save a DI version when you’re tracking?

Paul: We always record a DI track so that we can re-amp later on. But we try to get a good tone to track with right off the bat and may use re-amping as a layering effect to enhance certain parts. But we were happy with the tones straight away. We did some re-amping with the 6160 model in a few places.

Whats Your Stratergy for dialing in tones with BTBAM? 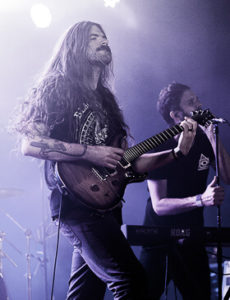 Dustie: I can’t stand a trebly sound, and we added a PEQ to the rhythm tone to push the mids to get something super-beefy and chunky. Over the years we’ve been backing down the gain and adding more mids so that it’s not so woofy through the front-of-house. We play a lot of chordal parts with weird voicings and unless you’re EQ’d right you’re really not going to be able to hear them. Paul and I have a different ear for tone: he’s a little brighter and I’m a little darker, which I think makes for a kick-ass tone together.

Paul: We try to find a balance between heaviness and clarity – that’s the ultimate goal. It’s hard to do when you’re in a heavy metal band, but we’re getting there.

Dustie: During recording, we’ll critique each other’s tones a bit, but we tend to instinctively know what sounds good together to make that BTBAM sound.

Paul: A lot of acts we see use the same tones across the band: the same amps, same EQ, same guitars, same pickups, etc. To me, I think it’s cool if you have two guitars in a band to have each one sound a bit different. It adds character and interest to the sound of the band if you can differentiate the guitars. Dustie uses different amp models than I use and we each have our own ideas on EQ-ing our sound, so it ends up being complimentary.

Are there any specific presets from the Axe-Fx we can hear on the new album?

Dustie: Songs like “The Black Box” and “Telos” use the Crystal Echos preset – I just switched the amp model to a Plexi with some minimal grit to give it some body.

Paul: I ported the Organ Grinder patch from the Ultra over to the Axe-Fx II and tweaked the delay tempo a bit. That’s something I do a bit as I love analyzing the signal chains of existing presets to see how they were constructed. We’re using the Axe-Fx II to create a lot of the atmospheric sounds on the record – we don’t always have to grab a keyboard to lay down some ambience.

Dustie: Right – and we find that the quality of the effects on the Axe-Fx is far superior to anything you’ll get with pedals.

Paul: And it’s just so tweakable. A pedal sounds like what it sounds like, but with the Axe-Fx you can tweak everything and modify the routing to zero in on the sounds in your head.

What’s on your iPod playlist these days?

Paul: I really don’t listen to a lot of heavy music – you get burned out on it when you’re on a heavy tour. What I am listening to is old country and bluegrass stuff: Willie Nelson, Merle Haggard, Johnny Paycheck. A lot of stuff our fans would never know that we listen to! I like listening to the tones on the old recordings and trying to mimic the sounds: those single-coil, slap-back delay sounds. I’ll try setting up presets in the Axe-Fx to copy those tones and then bring some of that into my own patches. Lately I’ve been getting into blues guitarists: I’ve really been digging Joe Bonamassa. I just saw him on TV and he was amazing. Plays great, sings great, has great musicians playing with him.

Dustie: I saw that too. It’s cool to see a guy who’s not overtly commercial doing so well. He’s a straight-up blues guy selling out all of these big venues. I listen to anything with Jerry Douglas on it. I don’t even want to call him a guitar player: he’s all about awesome phrasing. Every lick he plays is the perfect choice of note and time. I just love it. I listen to him all the time, whether it’s with Alison Krauss, solo, whatever. I also love Warren Haynes. Another guy with the tone in his hands where each note sounds like it’s gonna explode is Andy Timmons: he’s my man. He’s got “the tone”. He’s the master.

Paul: We all like guitarists that have a recognizable sound. You can instantly tell Andy – he has a tone you immediately associate with him. Pretty much any guitar icon is like that: Brian May has his tone. Dimebag Darrel has that particular tone. Relating this to our discussion here, it’s great to have a blank canvas with the Axe-Fx where you can dial in your own signature tone, as opposed to when you go and buy an amp, where it sounds like what it sounds like. It’s so cool that we can tailor our own individual sound in whatever way we choose. That’s what we like in guitar players, so that’s what we go for as well.

What’s on the horizon for you guys?

Dustie: We just returned from Europe after a month of festivals and shows. In the fall, we’ll be on a headlining run with some friends, on what will be our toughest-ever tour to perform. But it will all be possible with the Axe-Fx. If we didn’t have the Axe-Fx, I don’t know if we could do it as it would involve at least 5 amps, pedal drawers the size of a fridge…

Paul: And probably a s#!#-load of ground hum! We’ll be performing the entire new record and some other songs as well, so it’ll be a challenge but we’re looking forward to it. After that, maybe another small tour and back to writing another record.

Check out http://www.betweentheburiedandme.com/ for the latest news on Paul and Dustie.