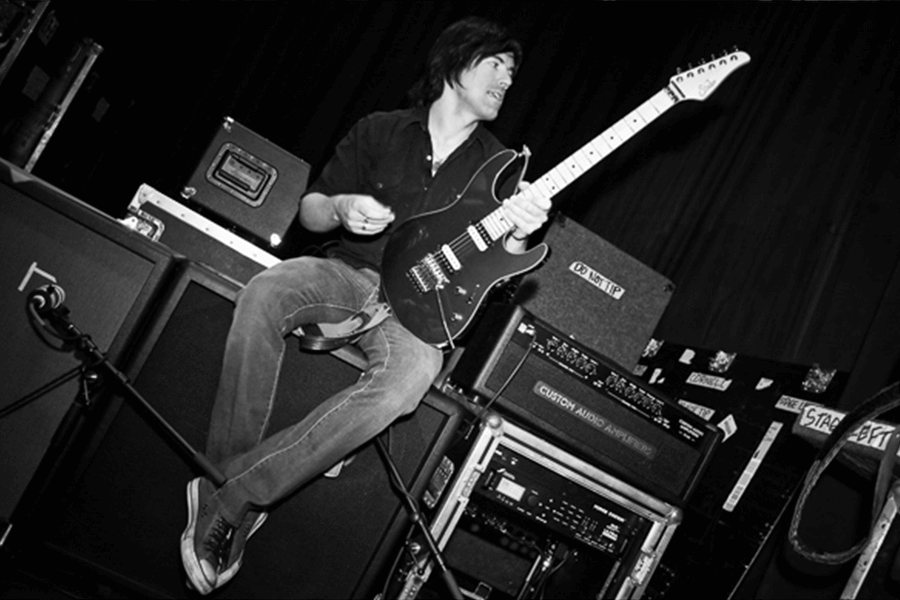 The council of rock guitar couldn’t appoint a better ambassador than Pete Thorn: he’s a player you’ll eventually discover and then routinely seek out. When scouting the personalities of rock guitar, we recognize Pete as a 5-tool player:

We’re delighted to have an artist such as Pete place his trust in Fractal Audio and his focus into the Axe-Fx. As Pete tells it: “I’m a total geek guitar nerd. I eat, sleep, and breathe guitar – it’s what I think about all the time.”How were you introduced to the Axe-Fx?

I picked up an Axe-Fx Ultra early – in 2008. I heard about it via word-of-mouth and online forums. I knew right away there was something in this box that other products didn’t have – they were really ahead of everyone else in regards to amp modeling and the effects were great. I was so into it that I recorded and posted a track within 48 hours of getting the Axe-Fx. It sounded great right out of the gate. I was hooked.

How did you start working the Axe-Fx into your workflow?

I initially incorporated it into my live WDW (wet/dry/wet) rig – and used the Ultra just for effects. In contrast to other units, I found that with the Axe-Fx, the more time I worked on my tones and the deeper I got, the better and better the sounds became. Programming iconic tones like “Black Hole Sun” for Chris Cornell yielded great sounds to me right off the bat and got me really excited about it. It’s a fantastic effects unit – ridiculously good.

Over the years, the Fractal platform has consistently progressed. I love that whatever it is today, it’ll only improve upon tomorrow: each firmware revision brings new features and tonal updates. The Axe-Fx was always a killer unit for modeling and effects, but now it can capture speaker impulse responses (IRs) and tone-match amps and recordings.

What part of that evolution has you most excited?

I love the ability to capture IRs – that’s been biggest thing for me. Once I was able to capture IRs within the Axe-Fx and hear how close the sound was to my studio, this was killer: because the speaker is the final filter on your sound. I never knew what I was listening to with the provided speaker models in other units, but once I started making my own IRs, it brought things to a whole new level. I could match my studio sounds, which I’ve put a lot of work into – it’s a known point of reference for me.

The first batch of presets that Pete is sharing with the Fractal community are based on two of his favorite amps: a Suhr SL68 and a Friedman BE100.

“My Suhr SL68 is essentially a great Plexi. John Suhr is a great friend and he made me this amp – it’s the very first SL68 that he made and it’s an idealized 1968 Plexi to John’s thinking. It brings forth that great Marshall tone. It’s very versatile: it’ll clean up nice, and will handle anything from cleans to bluesy rock n’ roll to Van Halen grind.

The other amp is the Friedman BE100 and that head has become a modern classic. It’s Dave Friedman’s idealized modded-Marshall voicing. It’s a little tighter than a Plexi – more controllable, while still having that Marshall flavor. You can get a fair amount of gain happening and the bottom end stays responsive and it feels really good to play.”

What was your process for creating this first batch of presets?

These presets are a combination of an IR capture and a tone match. Using my Suhr SL68, I dialed in a great tone using a using the Weber Legacy speaker housed in a Suhr 112 cabinet. I used a blend I like of an SM57 and a SE Electronics VR1 ribbon mic into an API preamp. I usually place the mic on the cap edge of whatever speaker I’m using. I dial in the mics and preamp, getting everything sounding great, and I’ll shoot an impulse of that cabinet. I find that after getting the impulse response in place you’re about 85% there before you even do the tone match. Then I go into the Axe-Fx and pull up a similar amp model, and make a chain that has the amp model into a cab block that has my IR, and then put a Tone Match block after that. Then I’ll go back and feed the output of the guitar cab, mics, and preamp into the Axe-Fx. I put the amp and the Axe-Fx tone match on an A/B switch and go back and forth between the two. I play the guitar into the amp and the Axe-Fx simultaneously, capturing both sounds at the same time.

What’s your biggest tip regarding IR captures and tone-matching?

When you’re making an IR, you have to take everything into account: it’s essentially a digital snapshot of the whole chain. Take your time time dialing it in and listen to how the speaker is being represented. Make sure there’s not too much proximity effect on the mics, as that will get captured. Make sure the mics are in phase.

When tone-matching, make sure you feed the amp and the Axe-Fx the the same part, whether it’s re-amped, or played simultaneously. I’ve found that playing them simultaneously really helps to capture the sonic color really well and makes it very accurate.

For players transitioning from a traditional tube-amp rig to an Axe-Fx rig, Pete recommends a thoughtful approach that minimizes the “option anxiety” that can overwhelm players new to the digital world:

One of the things I did when I started using the Axe-Fx live was to set up my normal touring rig, mic’ed up in another room, alongside the Axe-Fx on an A/B switch. Then as I’d dial in my sounds on the Axe-Fx, I’d switch back and forth between the two until I had things as I liked them and made my presets in the Axe-Fx that way. I was able to dial things in really closely. I figured at the end of the day, the crowd is going to hear your rig through the PA, so why not replicate that as close as possible, through studio monitors if you can.

For a touring set, you’re really using just a couple cabs and an amp or two, so limit your options to that at the start. Start small and stay comfortable. For instance, I started with 3 sounds to start with: a Deluxe Verb, 30W-TB, and Brit 800 to cover the clean, edge-of-breakup, and crunch rhythm sounds. From there, I was able to walk in with the Axe-Fx and start gigging with it because I had it dialed in on studio monitors and pretty much had it nailed. It felt very comfortable.

What are your favorite amp models in the Axe-Fx II?

Besides the the Plexi Treble and the Friedman BE that are on display in the presets, I also love the Shiver Lead, Division 13, and Class-A 15W TB. I love making those models sound like small amps blowing up. But all of the models have their place – it’s fun to mix and match and experiment with them all.

I know from watching your videos and reading your columns, you put a lot of thought into your processes as a working guitarist. How does the Axe-Fx help you in that area?

Musicians need to be self-sufficient nowadays – the Axe-Fx allows you to do that without sacrifice. The budgets aren’t the same as they used to be: you may not have a tech even on a big tour. Keeping your costs down is a huge factor for a working guitarist – shipping and cartage costs cut into budgets and the bottom line. Putting your sounds into the Axe-Fx, taking them overseas, and delivering a consistent performance each night wins you a lot of friends among the crew and the artists you play with. On the last European tour with Melissa Etheridge, I used an Axe-Fx through a power amp and guitar cabs on-stage and also ran a direct out to PA. The front-of-house engineer was using the direct sound through the PA – it was a consistent sound each show and he loved it.

You’re a self-professed gear hound, and say you love vintage equipment and tube amps as much as the latest technology. When do you choose the Axe-Fx over other options?

I do love tube amps, and I love the Axe-Fx. There’s room for both in my environment. I look at these options as flavors to impart to the different projects I work on. I use the Axe-Fx without reservation. It’s an all-in-1 Swiss Army Knife for guitar players – everything you need. I always tell people it’s not any one thing: it’s everything. You can use it in front on an amp, direct into the PA, in the loop of your amp…a million different ways. It will be there for you and perform flawlessly.

What projects are on the horizon for you?

I’m excited about finishing up producing a new record for Trisha Lurie, who is an incredible rock singer/songwriter. I’m getting ready to produce a new album by fellow Fractal artist Andy Wood, who’s a phenomenal player. I hope to finish up a follow-up to Guitar Nerd by the end of the year for an early 2014 release. There’s another Melissa Etheridge tour coming up, as well as talks of some other tours.

Keep up with Pete on his web site, www.peterthorn.com, as well as his YouTube channel which is regularly updated with gear demos, lessons, and performances.