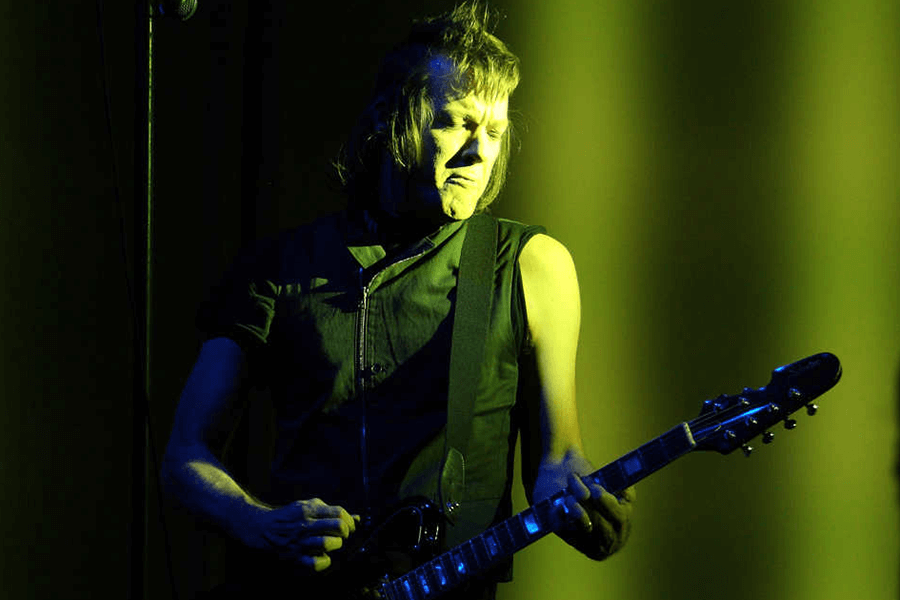 Robin Finck has had the good fortune of being in two epic, mega-bands during his career. From the blend of classic rock and modern tones in Guns N’ Roses to the post-industrial grind of Nine Inch Nails, Robin covers a wide range of sonic territory. In the past, Robin has employed various traditional rigs to cover this ground, and experimented with other amp simulators and profilers but has recently discarded those rigs in favor of an Axe-Fx II platform. “I’ve reprogrammed the whole NIN show using the Fractal. I have never sounded better and I’m psyched with each preset for every song. Really love the thing!” We recently sat down with Robin to discuss his new-found sonic nirvana that exists in the midst of the Nine Inch Nails thunder and growl.

What were some of your reasons for switching over to the Axe-Fx II?

First of all, the Axe-Fx just sounds phenomenal. We’ve found that it presents as raw or as polished a sound as you wish to the front-of-house. Other products we’ve used are basically a dry amp sound with some pedals added – a lot had to happen at the mixer to EQ and try to make the guitar fit into the mix. But the sound from the Axe-Fx II is mix-ready and blends great with the rest of the band.

I had a lot of tones to recreate but when setting up the presets, there would always be a way to find the sounds I needed as well as finding many new tones along the way due to all of the tools within the box. I was able to get rid of two drawers of pedals that I was using with my previous rig because I found all of those sounds in the Axe-Fx.

The preset switching is also super-fast. My previous rig took a lot of anticipation and coordination when switching presets because it switched sounds so slowly, which would disrupt the groove while playing. The Axe-Fx II is just a smarter unit than anything else I’ve come across.

What kind of ground is the Axe-Fx II covering during a Nine Inch Nails show?

I’m needing to cover an awful lot of sonic scape with the NIN tour. I’m putting everything through the Axe-Fx II: my guitars, a baritone growl, table-top violin, Martin Backpacker nylon-string, and more. I have the Axe-Fx going from dripping wet effect-laden vapor to damaging ones and zeros. This unit makes the trek fun for me to manage and to hear in my ears every night. I’m able to go direct to the front-of-house and monitor with in-ears. I also have a Matrix GT1000FX power amp and two Matrix FR12 cabs on stage for feedback purposes, but they’re not miked.

How was your experience integrating the Axe-Fx II into your stage rig?

Creating new complete, polished sounds takes about 15 minutes compared to two hours with previous systems. The ease of Axe-Edit was really appealing. We had to program 147 presets, and we were able to do that within the three days of rehearsals with no glitches. I know the work I’m putting into my sounds today can be built upon and brought forward as the software is updated. It’s all very cool.

With the Axe-Fx, I can audition different amp settings without having to take my hands off of the guitar. One of the switches at my feet is assigned to the X/Y feature of the Axe-Fx. I assign it to allow me to switch between two different versions of the same amp. It’s customizable, so I can save the switch to ignite different features of an amp, like boost, or bias, simple gain/level, change the speaker size, use different mic placements or subtly different speaker sims. It’s akin to the pickup switch on my guitar: I can have an alternative tone at the ready, yet one that is not a whole world away from where I started. This is terrific for me as rehearsals sometimes move along at quite a clip. It may sound like a paralysis of options, but it really is a time-saving, space-saving, money-saving, dream generator and makes my life more fun. I’m way into it.

How did you go about selecting amp models in the Axe-Fx?

I created a go-to palette of about twelve amps that I stepped through in the midst of rehearsals. These were just basic starting points from where I knew what to expect as I stepped through them. I selected and tweaked a gradient curve of clean to dirty, and from small single speakers to 4×12 cabs. It was too much fun to audition all of these Fractal possibilities – I got really square about it.

In the end, or rather, where I’m at now, that pallet includes a Prince Tone 1×10, Deluxe Tweed 1×12, Supremo Trem 1×15, Class-A 30W TB 2×12, Euro Blue 4×12, and Cirtus RV50 4×12. Some other amp/cabs that I’ve gone back to are the Atomica High 4×12 and some of the “Fractal-made-possible” combos, like the Jim and Leo blend, or the Plexi-AC30 combo, or peculiar Axe-Fx titles I had to Google to learn from where they originated. Fractal gives you a great platform to build your own combinations.

I usually employ the original cabinet simulation with the amp, but it is interesting to pair bread-and-butter amps with alternative speaker simulations. Sometimes that is easier and ultimately better than trying to get there with pedals and EQ and whatever else.

What do you gravitate towards for effects for the Nails show?

One of my favorite effect is the bit-crush drive. It has a great gated feel that I can tailor from a big blocky fuzz that stops dead in its tracks, to zipper-like legato single-note-follow-forevers. Another one I use often is the enhancer. It works to widen the stereo stage, great for outro choruses or mid-section repeats as a dynamic alternative to a boost. It doesn’t have the phasey throw that a chorus might have.

Of course, as anyone who sits with the Axe-Fx II for a day into the night will know, you can really create and sweeten to no end any classic warble you may be after. The mainstays are all there and they sound fantastic. You could create just about any type of delay, chorus, pitch effect, etc, etc, etc. – however subtle or dramatic. Assigning expression pedals to obvious parameters or to those never before considered really opens up the palette to new sounds as well. Then you can save your rig onto a thumb drive. It always turns on and demands less space than a few boxes of strings. The effects aspect of the Axe-Fx II is unsurpassed. But it’s the minutia of gain-stage, paired with the infinite spectrum of speaker simulation, that continues to inspire me most.

Being able to program a modifier to any parameter and assigning the controller pedal to it just opened up endless possibilities. I use a wah and one expression pedal on the floor, with the pedal controlling different parameters in each preset. On any other device we would have maybe 7 expression pedals on the floor to do the same thing.

Robin will be out on tour with Nine Inch Nails for the rest of the year. Special thanks also to Robin’s guitar tech Chris Whitemyer for contributing some information on Robin’s rig.